What is a robotic prostatectomy?

Robotic prostatectomy is the newest and most advanced surgical option for the treatment of patients with localised prostate cancer.

Typically a patient who has undergone a radical prostatectomy using the da Vinci Surgical System can expect to leave hospital in just one to two days and return to normal daily activities within the week. Depending on your occupation you can expect to return to work between 1 and 4 weeks.

Dr Peter Swindle is one of a small group of fully trained robotic surgeons in Australia. He performs robotic prostatectomy regularly and was the first surgeon to use the minimally invasive technique in Queensland using the State of the Art da Vinci robot.

In the USA, roughly 80% of all radical prostatectomy’s are performed using this technology, where the robot replicates the surgeon’s hand. The system is not programmed and is not capable of decision making, but requires that each surgical step be performed with expert direction from Dr Swindle. It has been used successfully in thousands of procedures worldwide. The surgical cart utilises one robotic arm to control the endoscopic camera which provides 3D vision, and three robotic arms to control surgical instruments. It is located next to the patient and allows the ability to rotate the instruments with unrivalled precision and control, using only a few small incisions.

The robot only requires incisions of less than 1cm, compared with an incision of up to 25cm for a traditional radical prostatectomy. This results in less pain, a shorter stay in hospital, earlier return to normal activities, less blood loss and less risk of infection.

The da Vinci robot is innovative technology that enables surgeons to operate in the difficult to get to lower reaches of the pelvis through very small incisions.

In summary, the procedure offers these potential benefits;

The da Vinci robot comprises the surgeon’s console and a surgical cart.

Dr Swindle commences the Robotic Prostatectomy by docking the surgical cart by the patient’s bedside in order to place the operating ports in the appropriate positions. This includes a robotic arm to control the endoscopic camera (to provide 3D vision) and three robotic arms to control the surgical instruments. Dr Swindle then sits at the robotic console and performs the operation, with an assistant surgeon at the patient’s side. 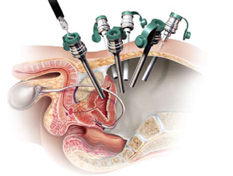 All up the procedure may take a few hours and consists of removal of the prostate and seminal vesicles, joining of the urethra to the bladder (the anastomosis) and then closing the small incisions.